A little rain wasn’t going to stop the Cyclones from throwing a great party to close out the 2019 Heart of America series.

Intermittent showers greeted morning arrivals at Lake Petocka, near Bondurant for the annual running of the race, organized by the Iowa State University Triathlon Club. But there wasn’t much falloff in attendance, nearly everyone who registered showed up, with just over 220 participating. 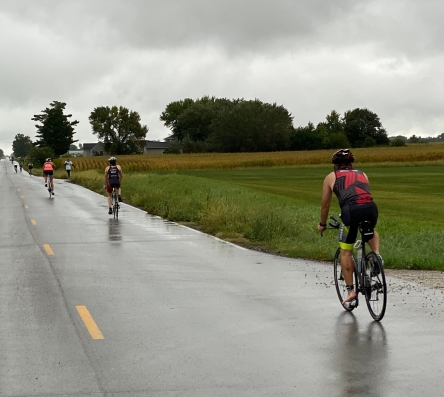 The rain made for a not-optimal spectator experience, but racers agreed that the cool conditions made for a pleasant bike and run. Times were fast, even allowing for extra caution, particularly on the bike.

Racers competed in age group and collegiate divisions, with colleges from all over the Midwest were represented. Cyman is also the championship race for the Heart of America series, with points champions racing in a special wave for free race entries in 2020. Results are age-equalized using a formula developed by USA Track & Field.

First across the finish line was Kaeleb Royster of the UI Trihawks, winning the college division in 1:02:13. Melanie Mahoney from the University of Minnesota claimed the women’s crown.

Women’s age group winner Greta Koppy had the day’s fastest women’s time, finishing in 1:12:09. She says that she’s been working hard to improve her bike this season, and really pushed herself on the run to stay ahead of Micah Pollett and Joy Carroll, two of the top racers in the region. Click on the photo for more from Greta. 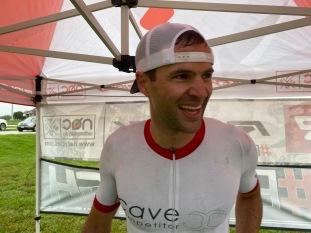 On the men’s side, winner Parker Day said he took it easy on the bike because of the damp conditions, so his victory was extra sweet. Click on the photo for his comments.

The Heart of America champions were all smiles at the race’s end as well. Several picked up age group awards as well as free entries for next year.

One final note: 2019 marks the final season of the Heart of America reporting and announcing team of Ron Adkins, Jon Weih, and myself. It’s been an honor and a pleasure to hang out with, and chronicle the good times of the participants, family, and friends of Iowa Triathlon. We all hope that our paths continue to cross with yours!

Middle-aged public radio manager, occasional writer and stage performer. You can find me at the Washington H.S. pool many mornings at 5:30am. View more posts